The water temperatures are cooling and the annual fish migrations are starting. September is another prime month on the Vineyard. We have it all! Bones, albies, stripers, and blues become available in growing numbers. The quantity and size of most of these grow as the month goes on. If you are going to fish the derby, most try for their bonito early and then work their way through the other species as the bones are the first to leave the area. The stripers and blues tend to get larger toward the end of the derby. The annual Martha's Vineyard Striped Bass and Bluefish Derby begins mid-September and extends into the middle of October.

Early October fishing is still good but as the water temperatures cool the fish continue to move south. Fewer fish are caught but those still around can be some of the largest. Bonito become spotty at best and the false albacore aren’t as plentiful. The bluefish appear sporadically but are generally hitting anything you can throw to them. The same can be said of the stripers. By this time most of us are throwing bait at night for the big cows. While the fishing isn’t as consistent, it can be some of the best times due to the nice weather and diminished crowds. 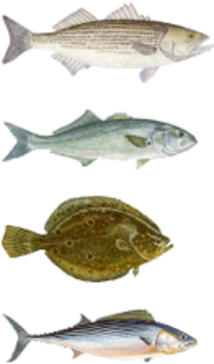 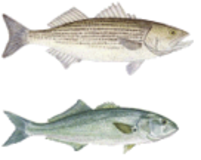 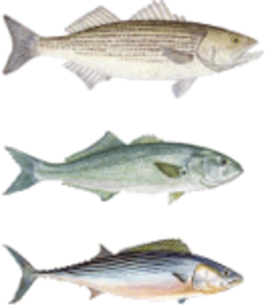 Bonito tend to be the prime target for August fishing. Schools of frenzied bonito pop up everywhere. Warning: they can be as frustrating to catch as they are exciting. Skill and luck are equal partners in successfully landing a “bone”.

There are still bluefish to be found and stripers are holding in the deeper water waiting for the temperatures to cool and the bait to return. The fluke are still available and again I would look to an area where a shoal drops off to deeper cooler water. However, bonito and the anticipation of the first albie is where the action is. False albacore start to appear toward the end of the month.

For an added bonus occasionally we are able to locate and catch small blue fin tuna and mahi as we did several times last year.

As the waters of the Vineyard warm through the month of April, the bait starts to gather in earnest. The warmer days of May signal the starting gun for serious fishing.
To see the current states rules and regulations, please visit 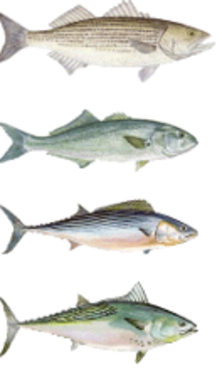 Striped bass fishing starts to slow in July especially from the shore primarily due to the warmer water. Fish can still be had in the deeper offshore water. Charter captains and other knowledgeable fishermen can consistently find the spots that will hold these 12-30 pound fish.

Small bluefish continue to be available depending on the bait supply. For this reason access to as much beach as possible can be key. 4X4 beach transportation is virtually a necessity.

As we approach the middle of the month Atlantic Bonito begin to arrive. The bonito is an extremely swift predacious fish of the tuna and mackerel family. They grow to approximately 30" and weigh 5-10 pounds. These are more than a handful on light spinning or fly fishing tackle. 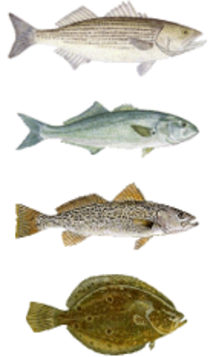 June is one of the prime months to fish. Striper fishing continues to be strong all month. Bait availability and water temperature start to become factors in the success rate. Generally the odds favor fishing from a boat as the month wears on and the water warms but fishing evenings from the beach can still be very productive.

The bluefish continue to be hot especially during the day. Success keys are bait, tide and structure. The larger fish are moving north or toward cooler deeper water but generally there are a good number of smaller fish around.

Weakfish or sea trout are occasionally taken on light tackle and flies. The good news is that their numbers have been growing over the past years.

Fluke or summer flounder are starting to feed. These can be caught from shore or boat with boat fishing being the norm. They prefer small bottom fished bait strips or lead head jigs. After several hours of fishing light tackle for blues and bass, fluking can be a great end to the day with a good chance of bringing home dinner. In addition, recreational black sea bass season is open providing chances at delicious table fare. 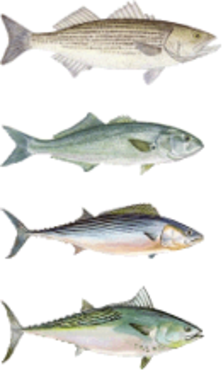 Although stripers will begin to show in selected spots on the Vineyard in April, it is May when the fishing begins to warm up. Smaller fish (schoolies) are the first to appear with a few keeper fish mixed in. As the end of the month nears, the larger fish become much more available. State recreational fishing regulations allow 1 fish per person to be kept each day. Striped Bass must measure at least 28" in length.

Bluefish begin to show toward the middle of the month. Medium size fish in the 7-12 pound range are the first to arrive. Slightly smaller fish will follow as the month progresses into June. There is no minimum length for bluefish however the daily keep is limited to 10 fish.